The company name, Papa Ray's Marketplace, came from two of Monik and Ray's grandchildren. When they asked the two little girls that lived with them, Camille and Olivia, about what to call the business, they thought Papa Ray's sounded a bit more palatable than Grandma Moni's. Thus, Papa Ray's was born!

As a child in Essen, Germany Monik would often bake with her Oma. They would spend hours cooking and baking and spending time. Later when Monik moved to America and had her own family, she made many of those same recipes for her own family here. Each time she had company over they would rave over her baked goods and her other delicious treats, often remarking they should be made available to the public. One day she got the news that her Oma had passed away, after her death, her family in Germany sent Monik the very cookbook that had been used by her and her Oma in their cooking. When it arrived, Monik and Ray saw all of the delicious recipes and decided to give it a go and try selling the mixes to the public while honoring her Oma at the same time.

The original set of mixes were about 8 different styles. They were packaged in white bags and cloth bags with a pattern reflecting the mix inside.  Though they sold well, they were very time intensive to make and with the way they were selling, they were having a hard time keeping up! As feedback from customers started coming in, they realized they had a great product on their hands. After the first big show in about 2007, they began looking for other shows across the state. They began to enjoy being face to face with their customers and have actually built great relationships with many. Some have been with us since the beginning!

The line has continuously grown throughout the years. With growth came a need to have some outlets where people could purchase the mixes between shows. With building a website for buying, they decided to try to keep it in small businesses also, which is where you will find it throughout Washington, Idaho and Montana.

Papa Ray's Marketplace now sells over 55 different varieties of mixes and as they continued to grow, they incorporated some of Papa Ray's delicious family recipes as well. His grandmother's Sourdough Pancake recipe is one of our most popular pancake mixes to date!

As of today, Papa Ray's mixes have been sold in every state in the country. Papa Ray and Monik's main objective is to make the world taste better, one mix at a time. They do that by continuing to make their mixes in small batches to ensure quality and consistency. All of their ingredients are well thought out and the best available. They do not add any preservatives, artificial flavors, trans-fats, cholesterol, or high-fructose corn syrup. Ray and Monik are always available to address any issues or concerns and truly believe that customer service is the foundation of a successful business. In 2016 they brought their daughter Cindy on board to help with the online business. She handles all of the social media, website business, etc. As you can see, Papa Ray's is a true family business made up of the three of us.

Our family, ready to serve yours! 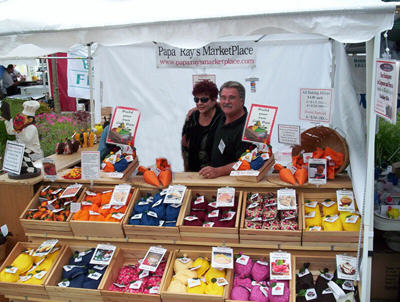